Ember is a dating app meant to reduce the instant gratification of speed matching by slowing down the process with more thoughtful action. 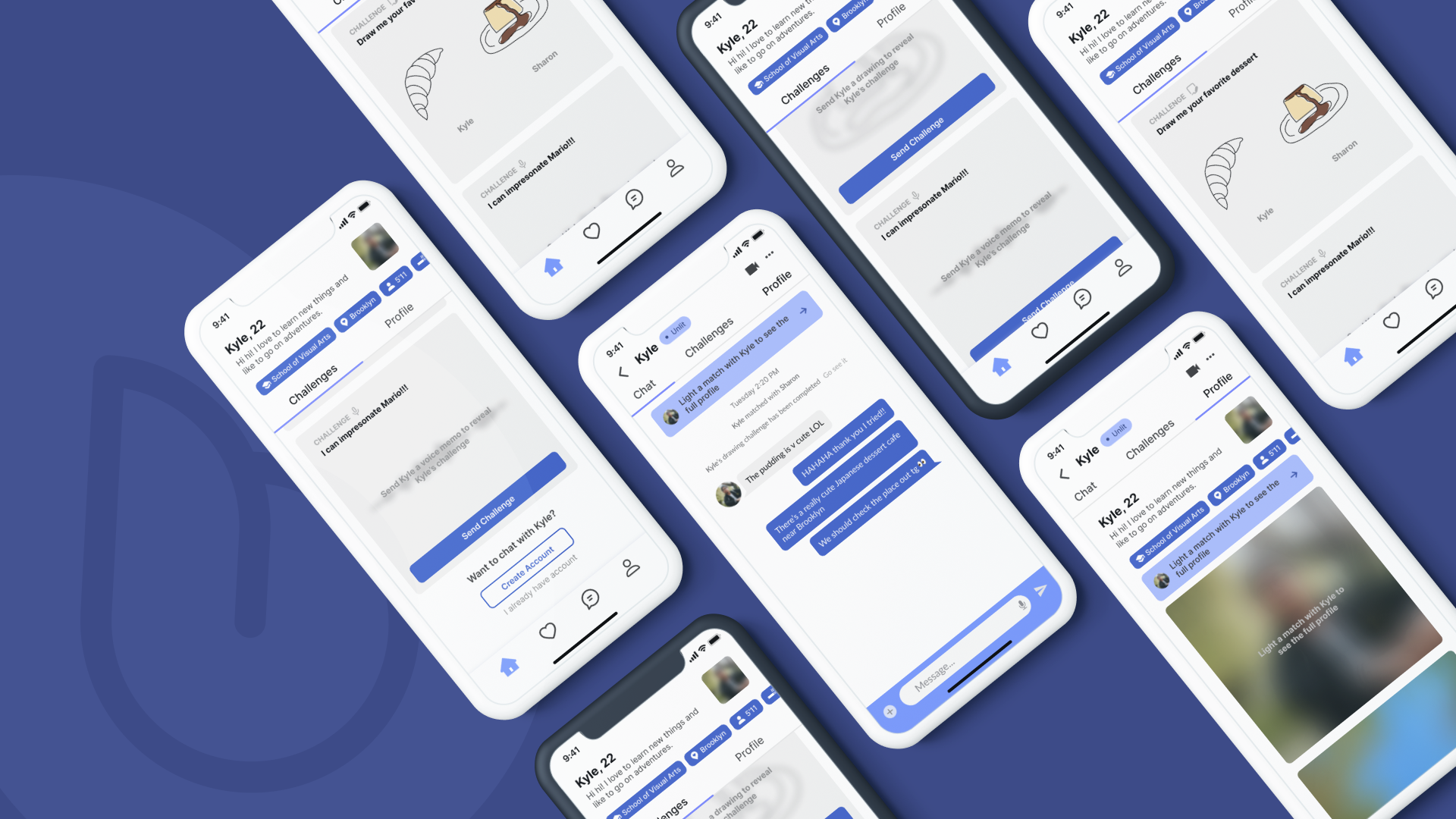 With the overwhelming amount of people using dating apps, the access to finding a match increased as people can find multiple potential partners easily just at the tip of their fingertips.​ But along with the ease of access, it has become more difficult to take these applications seriously as all they call for is a swipe or tap of the finger.

Does matching with someone on an online dating app mean you really match with them?

The ease of swiping and liking actions foster an environment of mindless interactions that overcrowd potential matches which undermines how users would interact.

What is the current stigma of dating applications?

For this project, various research methods were used with a primary goal of understanding what stigma of dating applications exists and why it exists.

What do you think dating apps primarily used for? 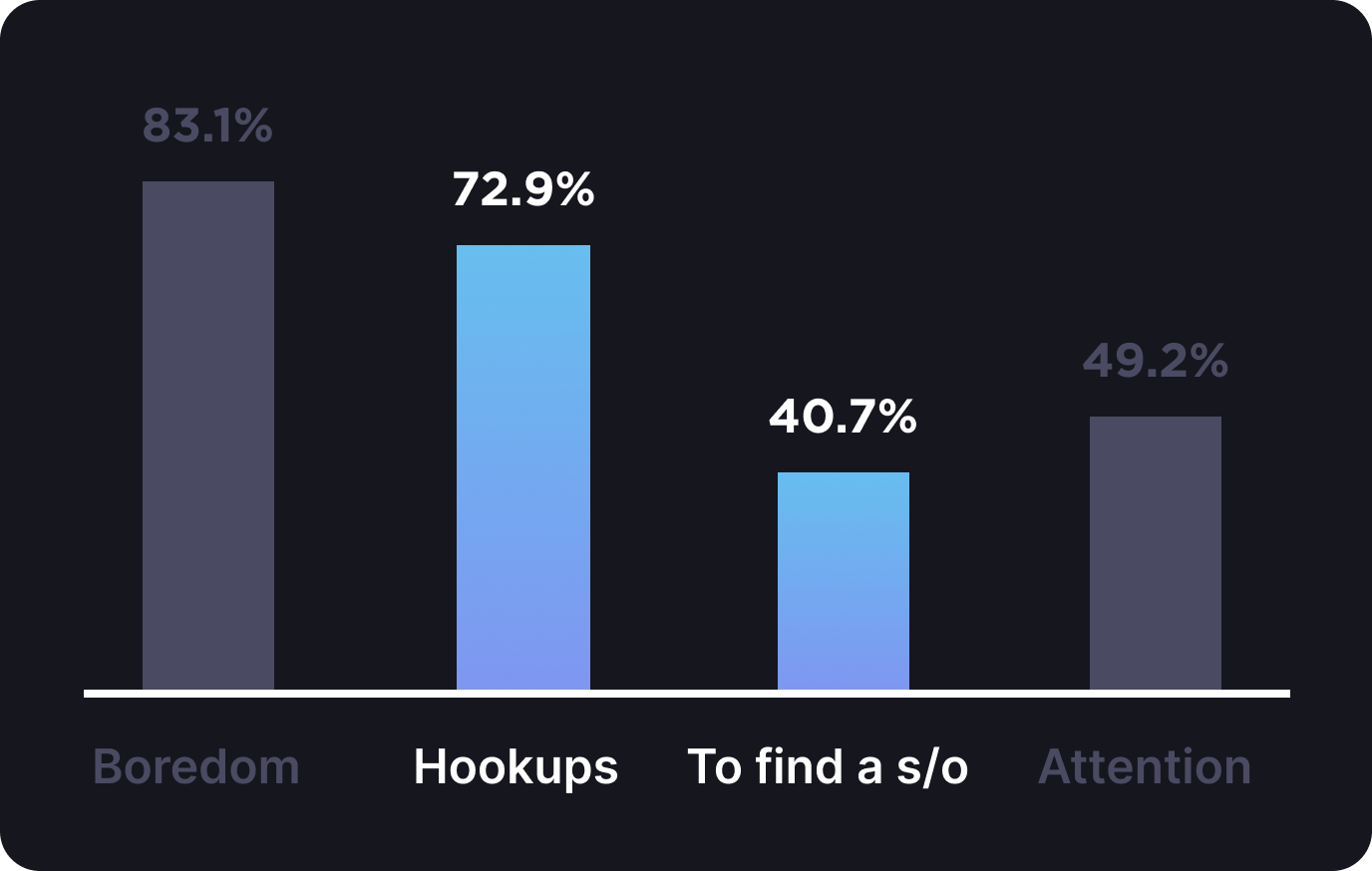 What do you use dating apps primarily for? 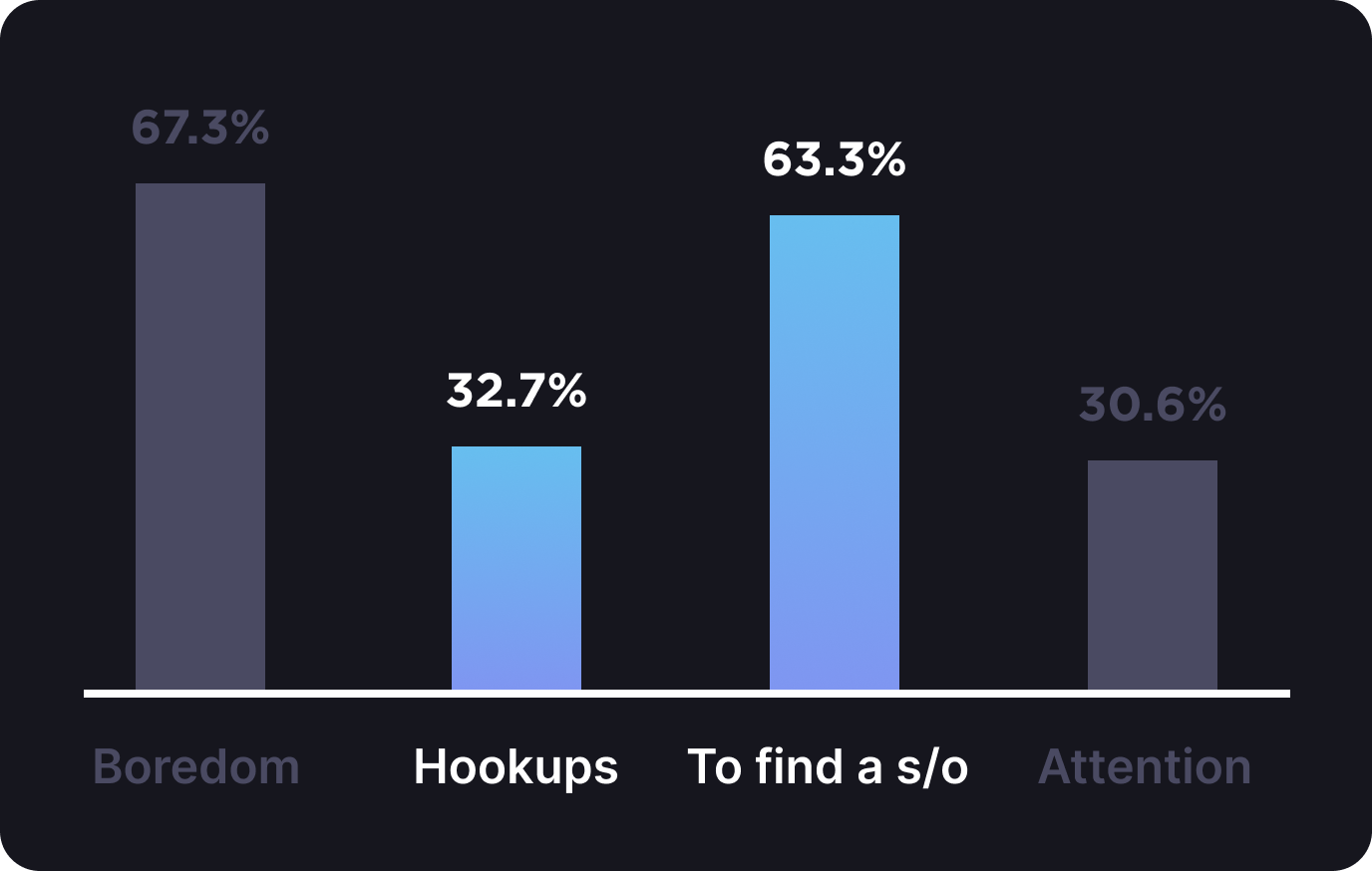 In summary, although the majority of the survey participants were active dating app users that were looking for a significant other(63.3%), there were still such assumptions that dating apps are used for superficial reasons(e.g. hookups and peer validation) meaning that the users' intentions were not clearly aligned. We wanted to find why such reputation exists, so we decided to conduct our secondary research by interviewing 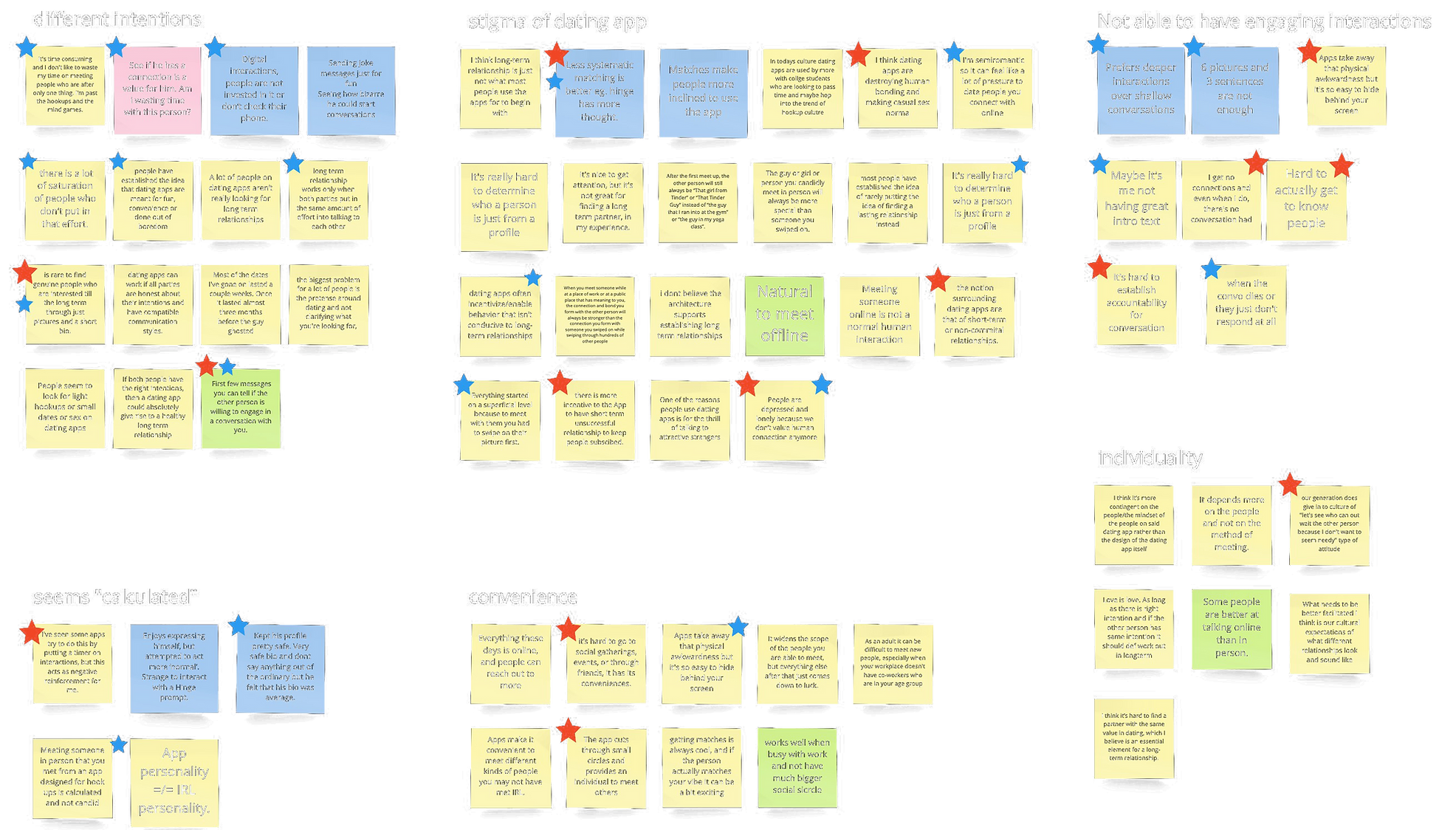 "Everything starts on a superficial level because you have to swipe on their picture first to match."

"I tend to be hesitant but only until when I see the other person puts effort to engage in a conversation."

Swiping itself brings joy of meeting new people, it's the clarity of intentions behind the ease of swiping

→ How do other apps in the market currently utilize this user behavior on swiping and matching?

1. Dating apps often incentivize and enable behavior that isn’t conducive to long-term relationships
‍
2. The current atmosphere of dating apps doesn't allow users to be clear with the intentions, which leads to many users' hesitancy to be honest
‍
3. The expectation for a user to present the most physically attractive versions of themselves pressures them to give the impression of a certain image that deviates from who they really are.

How might we combine the convenience of dating applications with a more thoughtful approach? 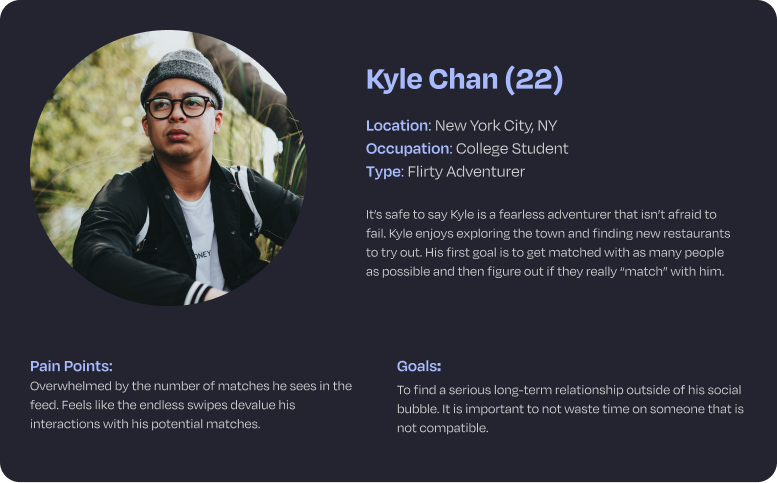 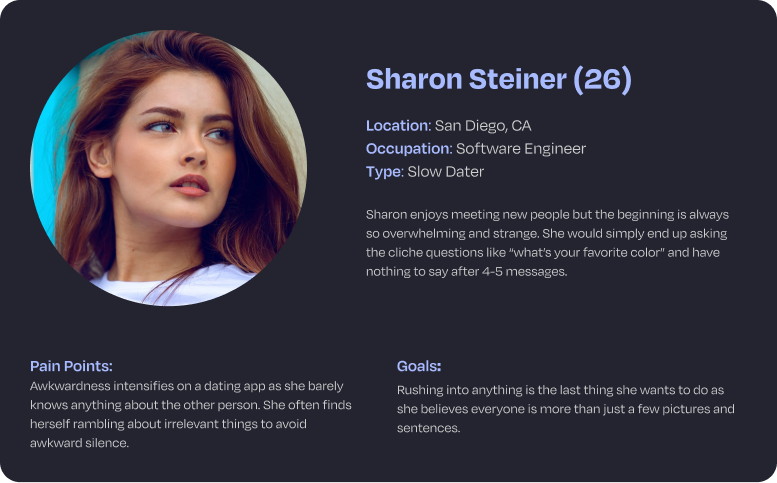 Goal for Kyle:
→ has clear ideas about his matches’ intentions
→ finds exploration joyful

Goal for Sharon:
→ finds it easy to facilitate conversations
→ has clear ideas about her matches’ individuality

Some Trials and Errors 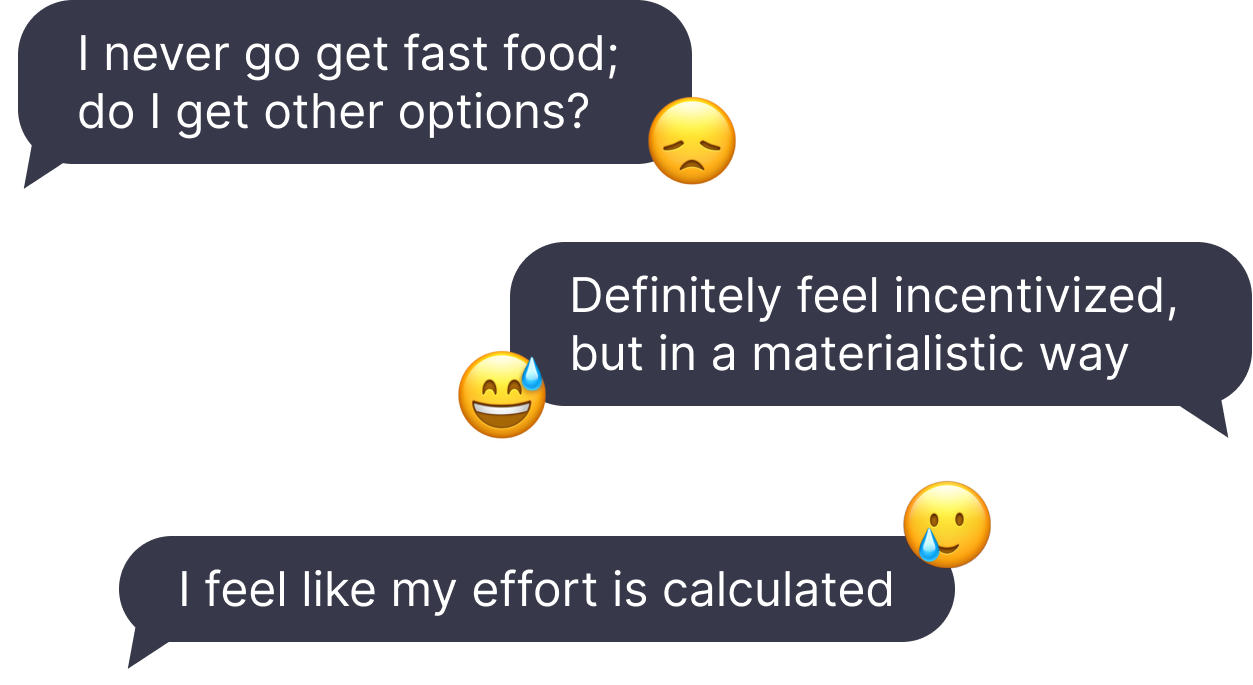 Hypothesis: Having to reach certain milestones will incentivize users to spend time with one another. 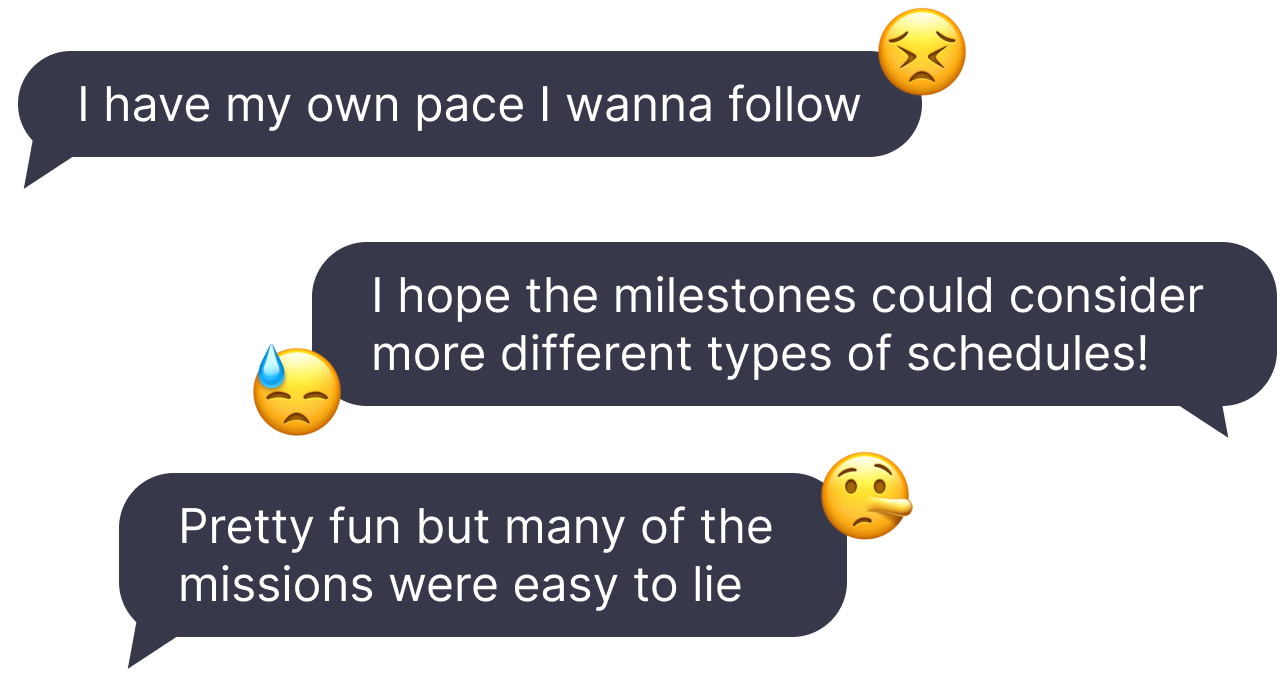 Hypothesis: Users will bond as they experience more tasks together creating a more genuine relationship and providing a foundation to build relationships upon. 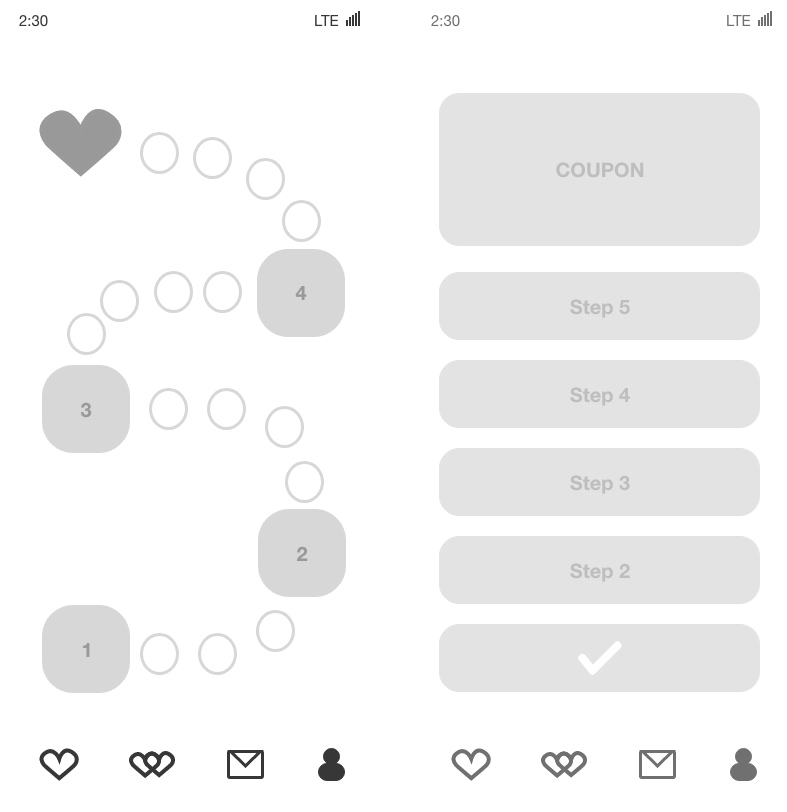 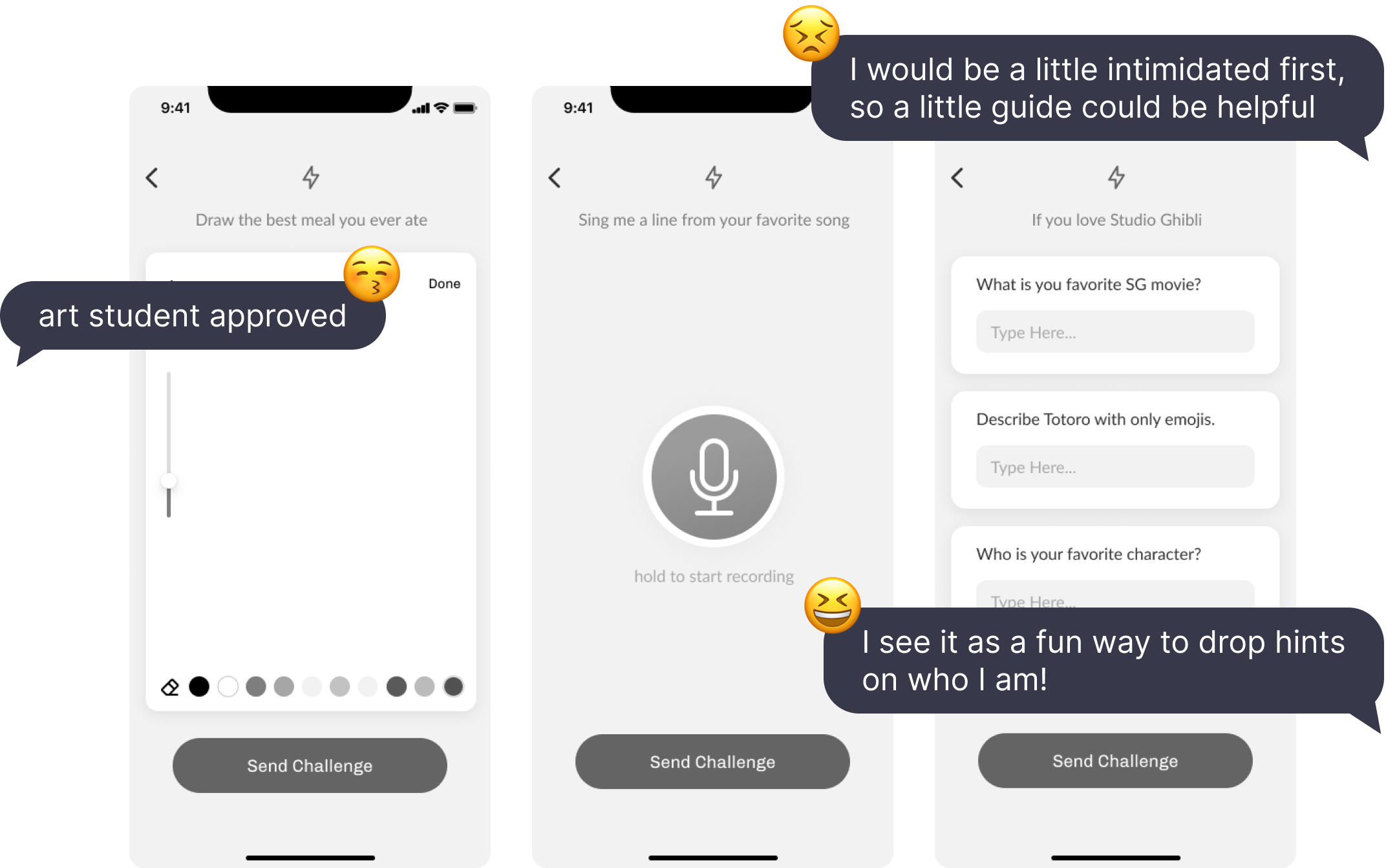 Hypothesis: Optional challenges that allow users to complete at their own interest and time schedule will highten the interests of users on the receiving end.

→ This can be a both thoughtful and personal approach which will be a win-win on both giving and receiving ends from the extra effort made by their potential matches.. 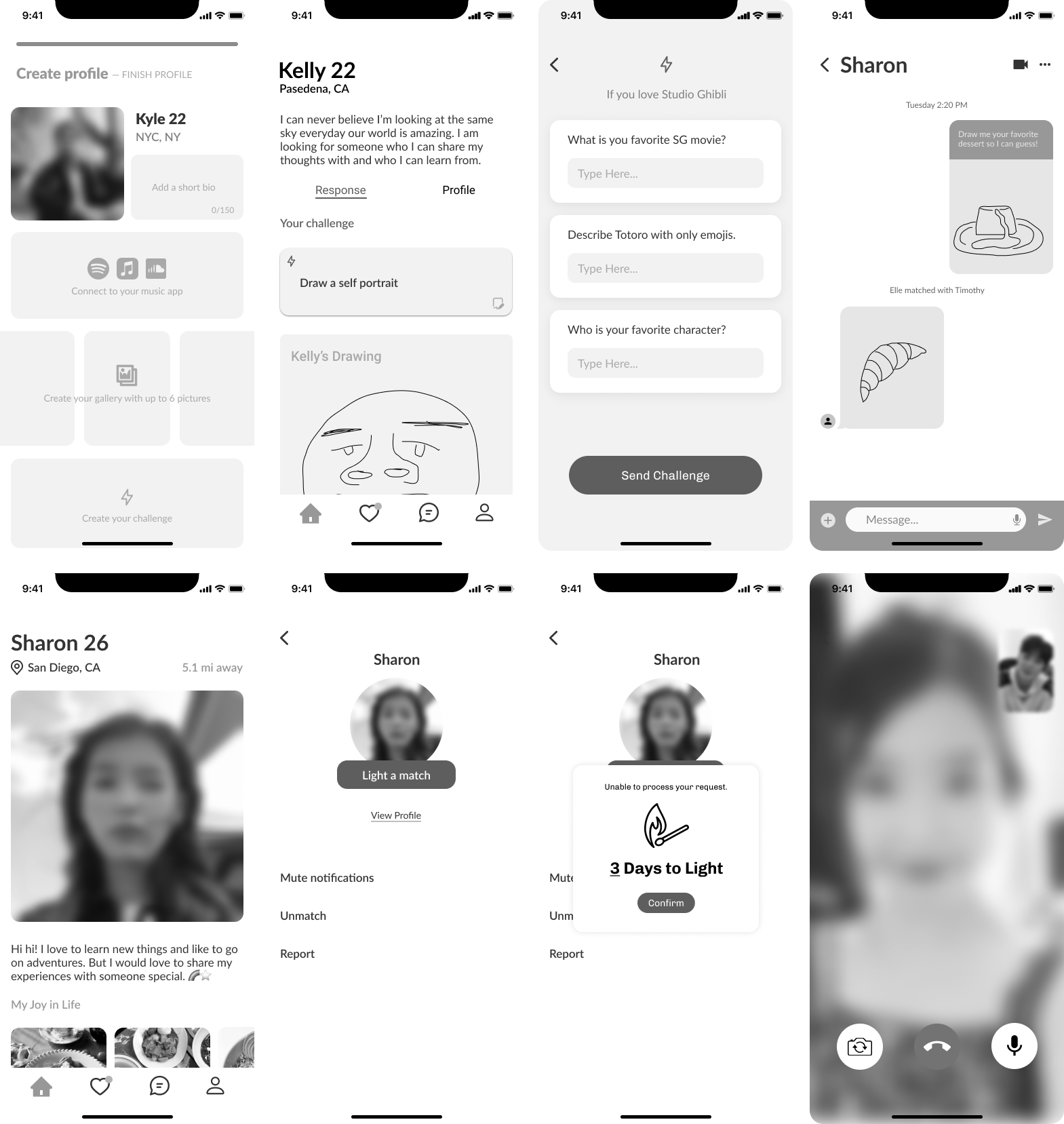 With our first version of the product, we led an open conversation with 5 active dating app users from our initial survey on how our product is doing well and how we could improve. 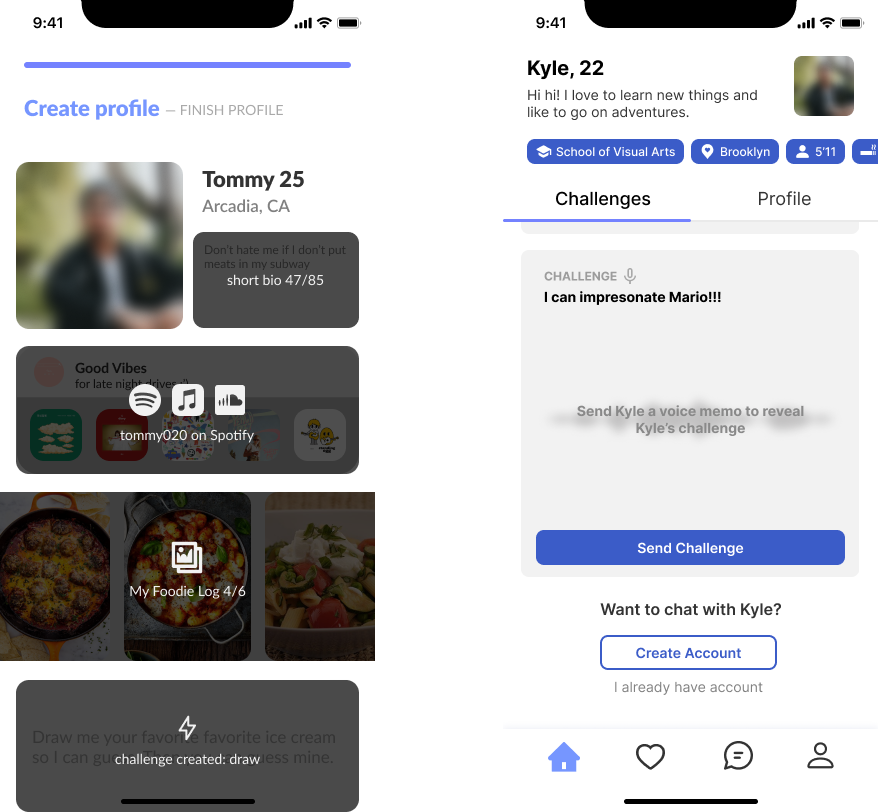 "Being able to customize profile is interesting"
"there could be other ways to address flexibility and creativity in the profile that are not necessarily building the profile from scratch."

→ Profile section is organized into two taps
→ When a user first downloads the app, they see a profile of others before making their own 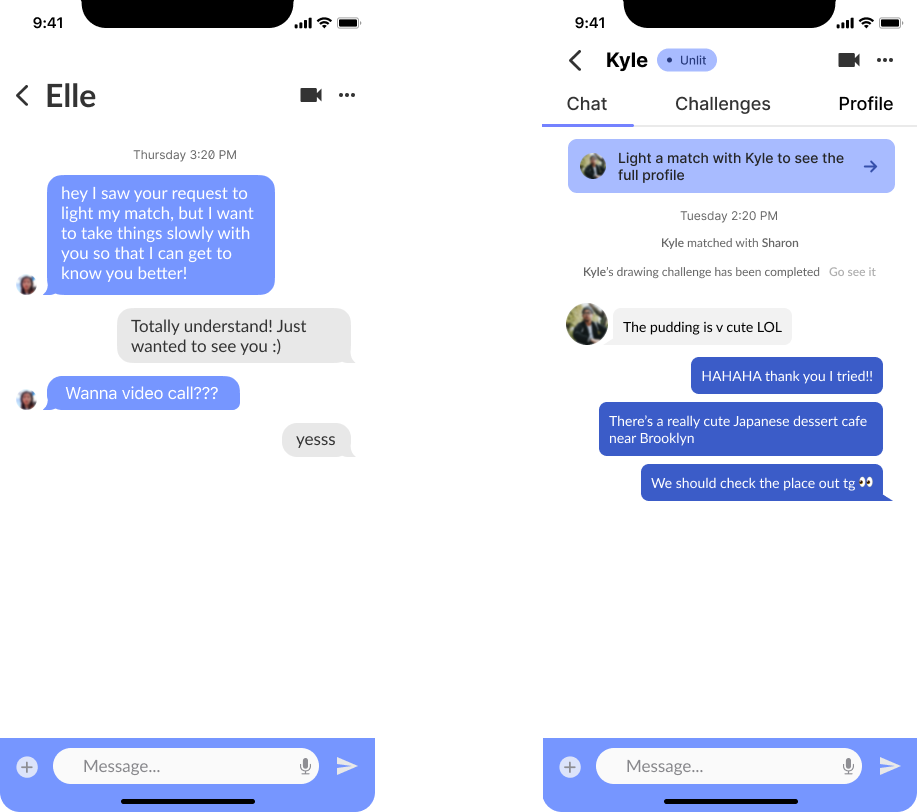 "I didn’t understand why the images were blurry at first. It took me a while to find “light a match” button under the profile."

As we were in charge of this project end-to-end(even outside of the design!), it was such a fun exercise for three of us to virtually collaborate. We became more creative about how to utilize the digital space more efficiently, better showcase our ideas and proposals to our supervisors, and communicate with limited resources.

Designing with no business constraints allowed us to fully explore and be adventurous as well, and I was able to find what it is like to design with joy. To finish off, here are some of my takeaways!!

→ finding the middle ground of flexibility and convenience.
‍
→ we are not designing to define what's more superficial than another, but to allow users to better define their own priorities.

→ The importance of including all users at different paces 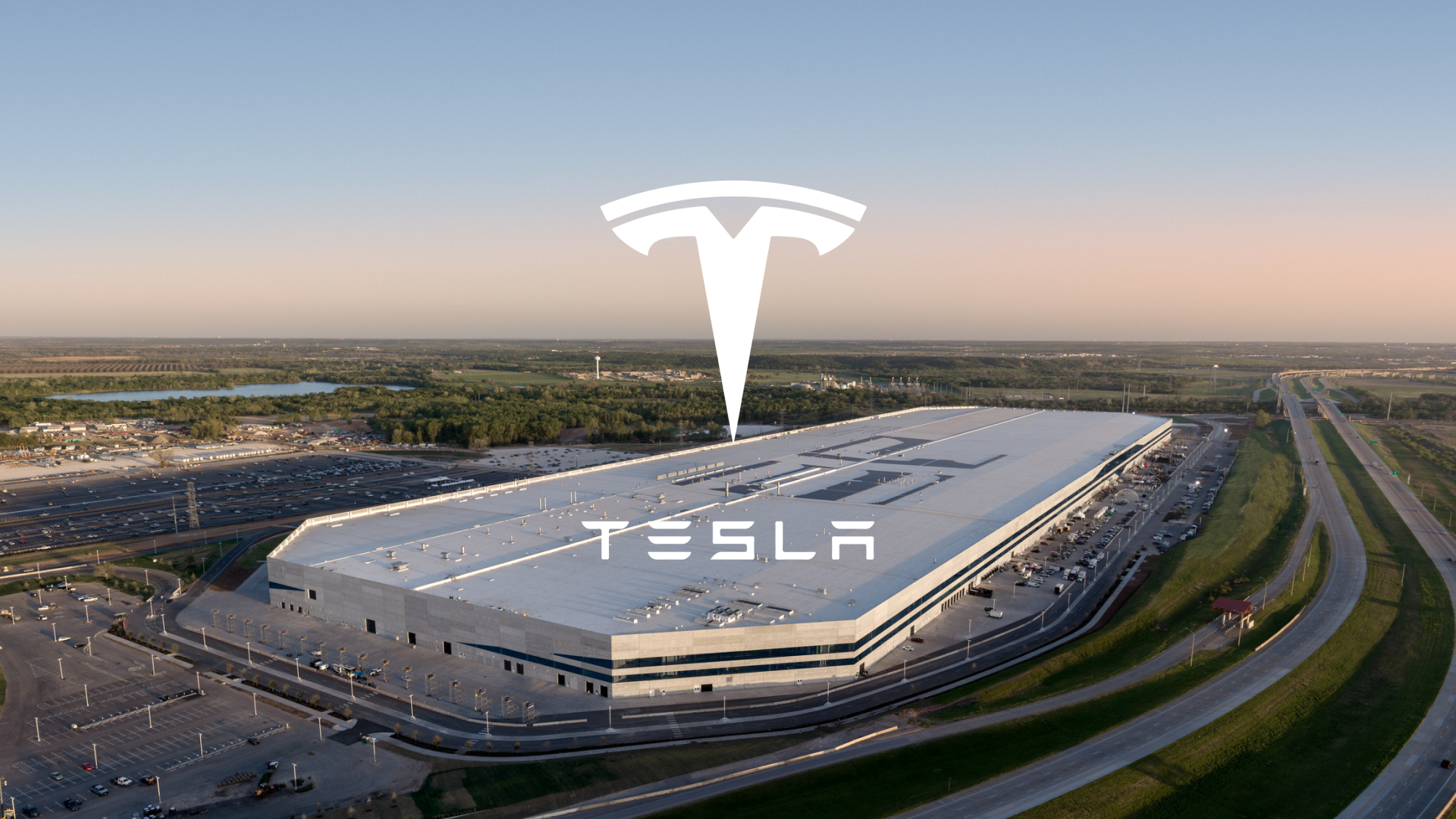 UX Design for Tesla Design System Team to design Tesla's design library used by the designers and engineers across all media platforms.